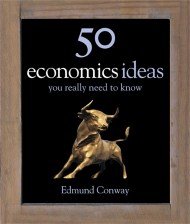 What exactly is a credit crunch? Why do footballers earn so much more than the rest of us? Which country is likely to be the…