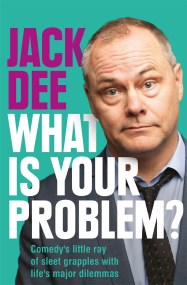 What is Your Problem?

'I inhaled it. HILARIOUS. So sharp - it really made me laugh' Katherine Ryan