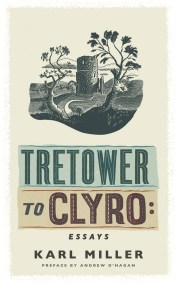 Karl Miller is one of the greatest literary critics of the last fifty years, the founder of the London Review of Books and Lord Northcliffe…