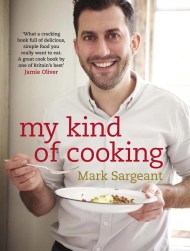 My Kind of Cooking

MY KIND OF COOKING is Mark Sargeant's exciting introduction to food that few people usually consider, or have the confidence to cook. It is also…