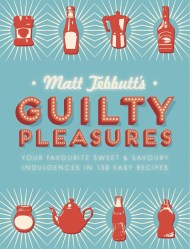 We all know that a little bit of what you fancy does you good. In Guilty Pleasures, Matt Tebbutt takes your sneaky treats, like peanut…